Do the NFL’s Anthem Protest Rules Violate the First Amendment? 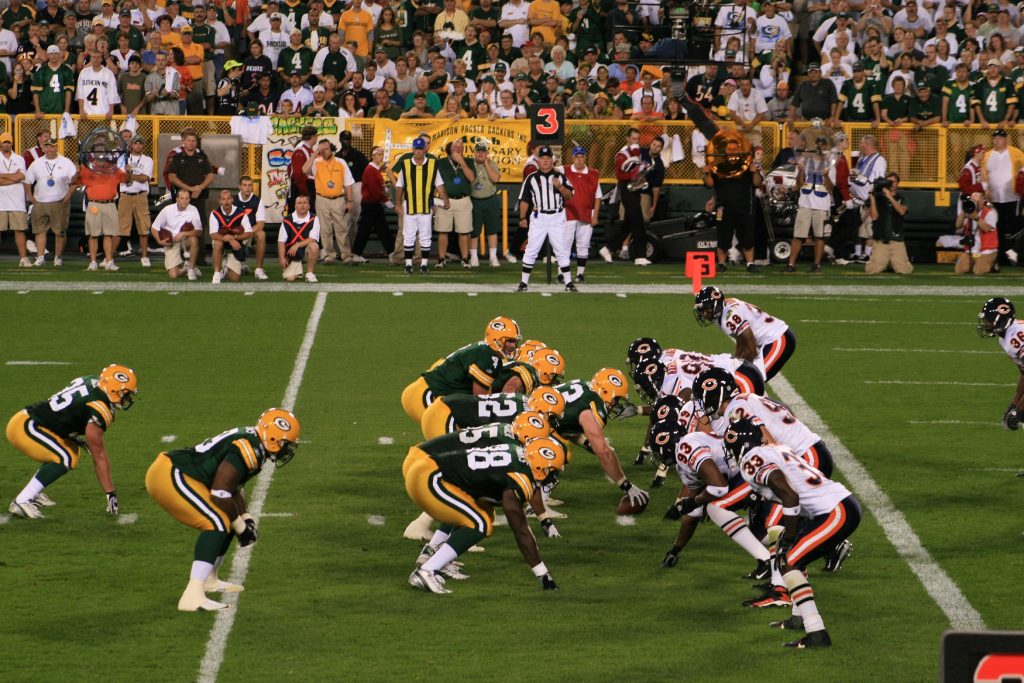 Picture by Paul Cutler. Used under a Creative Commons license.

Last season, African American players in the National Football League (NFL) protested police brutality by kneeling during the national anthem.  Last week, the NFL adopted a new rule that requires all players on the field to stand for the national anthem.  Players will have the option to remain in the locker room.  However, if a player on the field refuses to stand for the anthem, his team will be fined. This new policy causes us to consider whether the NFL’s anthem protest rules violate the First Amendment.

What the First Amendment Says

The NFL Players are Likely Engaged in Speech

Protesting players have a strong argument that their activity is protected speech.  While spoken and written words are clearly protected by the First Amendment, the Constitution also protects some forms of non-verbal activity.  For these actions to receive First Amendment protection, the actors must intend to communicate a message and that message must be easily understood by those on the receiving end.

The NFL players are protesting by kneeling during the national anthem.  Statements made by Colin Kaepernick and other protesting players indicate a clear intent to communicate a message.  Mr. Kaepernick’s statements on his protests leave no doubt about his reasons for protesting.  When asked to explain his decision to kneel during the anthem, Mr. Kaepernick stated, “I am not going to stand up to show pride in a flag for a country that oppresses black people and people of color.”  Moreover, the response from the NFL and the public demonstrate that the message has been seen and understood.  Thus, the players’ actions are likely speech.

The NFL May Not be A State Actor

While the players’ actions would likely be considered protected speech under the First Amendment, the analysis does not end there.  The NFL’s anthem protest rules violate the First Amendment only if the NFL can be considered an agent of the government, or a “state actor.”  Unfortunately for the protesting players, this question is far more complicated.

As stated, the Constitution applies only to state actors such as federal, state, and local governments and agencies.  According to its website, the NFL is governed by a commissioner and an executive committee.  There is no indication that the NFL is a government agency.

Nevertheless, federal courts have ruled that a private business may be considered a state actor under certain circumstances.  In one case, a court found that the New York Yankees could be considered a state actor because Yankee Stadium was built on public land with public funds. Because many teams or stadiums have financial relationships with local governments, there is an argument to be made.  However, the argument is not foolproof.  Some scholars believe that later cases from the Supreme Court have weakened this doctrine to the point where it may no longer be viable.   Moreover, applying state action to one team would not be the same as applying the doctrine to the entire league.  As such, it may not be a strong argument.

Another possible constitutional argument is that if the NFL’s rules have been adopted as the result of pressure from a certain president, it could be considered state action.  In 1963, the Supreme Court ruled that there might be state action where a private business acted to avoid “the threat of invoking legal sanctions and other means of coercion, persuasion, and intimidation” from the government.  However, the case is quite old, and the Supreme Court has decided many cases since that time.  Thus, there is no guarantee that the federal courts would apply the same doctrine.

In sum, whether the NFL’s anthem protest rules violate the First Amendment turns on whether one can argue that the NFL or its teams can be considered state actors.  Follow the African American Attorney Network for legal analysis and insight into news stories that impact the Black community.

103 responses to “Do the NFL’s Anthem Protest Rules Violate the First Amendment?”